I know I have been more than blessed when it comes to meeting Leonard but luck was on my side in Dublin again and I’ve now got a few more precious items signed. I’d have been happy with him just putting his name but ever the gentleman he personalised everything.

I was blessed to meet Sylvie in New York and for her to sign this book there so I made sure to have it with me in case I met Leonard. As we were talking Leonard was telling me it is a lot of money I spend on him and his concerts and that I really shouldn’t. I told him he is worth it and only for him would I spend that kind of money. He then added a very special unique few words to this dedication.

Close up of Leonard’s signature 🙂 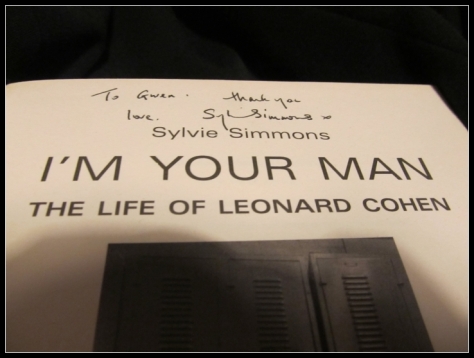 Close up of Sylvie’s signature.

When I first saw this magazine and loving the photo of Sharon and Leonard I had a dream of getting it signed by both. Leonard signed it first and said I had to get Sharon to sign it too. The following day it was mission accomplished!

Close up of Leonard’s signature

Close up of Sharon’s signature 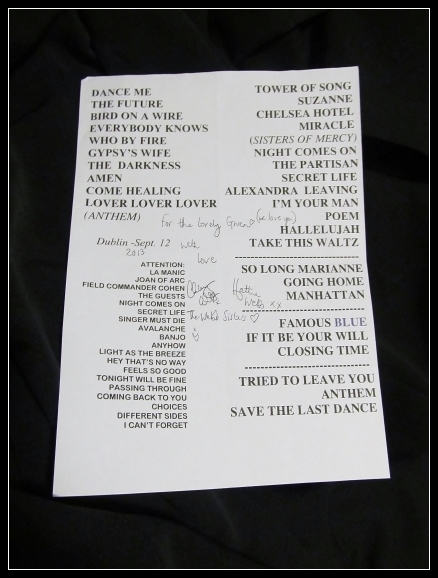 After the 2nd Dublin concert I was speaking with Hattie Webb and she said she had something for me. I was so touched when she produced this set list for me saying she thought I might like one and then proceeded to write on it for me and also asked Charley to sign it. I was and am so honoured with this gift as never in a million years would I ask any of the band for any favours so for this to happen really touched my heart. 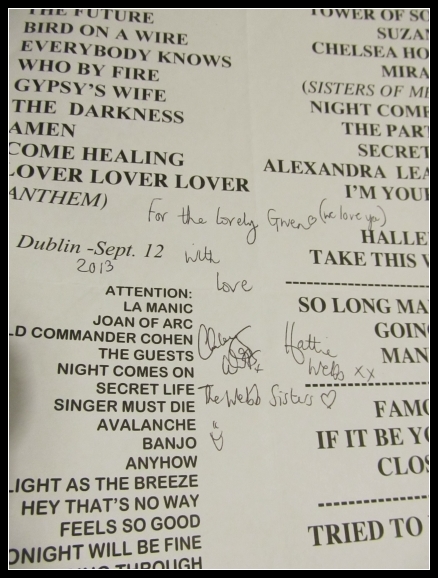 Close up of Hattie’s wonderful dedication and Charley’s signature too.

Signed photo that I took of Leonard in Brussels.

A signed photo of the best moment of my life. Leonard really liked this photo too.

My initial plan when I got this bag was to use it for my course as I need a big bag for it but now it is signed it will only be used for special occasions. I was only showing this to Leonard and not asking for it to be signed as I didn’t think it would work on that type of material. Leonard after again telling me I spend too much money said it would work and he’d sign it. The ink bleed a bit and Leonard said to me I was right. I told him it was ok, there is a crack in everything. He loved the song reference and I love my unique bag! 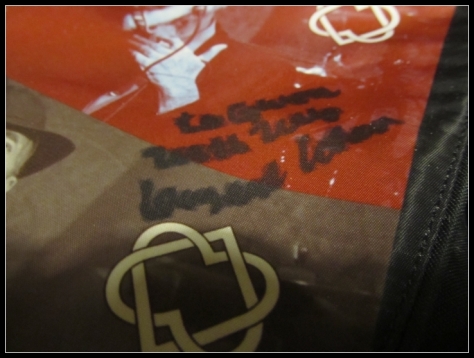 A close up of the signed bag

Knowing how kind Leonard had already been with his time we asked for only one photo, one of the 3 of us together as we had no photos of the 3 of us but Leonard being Leonard said we could get photos together and separately. Yes we really are blessed!

Thank you Leonard, Sylvie, Sharon, Hattie and Charley for the memories.

Apologies for the serious delay with this post! I had it ready to post shortly after returning from New York so no excuses as to why I am only posting it now except to say live Cohen withdrawal symptoms is the only excuse 😉

When in New York there was a fan dinner organised by Dick Straub and his wife Linda for the night before the first concert on April 5th in a wonderful restaurant called East of Eight which is beside The Chelsea Hotel. Before the dinner I took the opportunity to take a couple of photos outside the hotel. 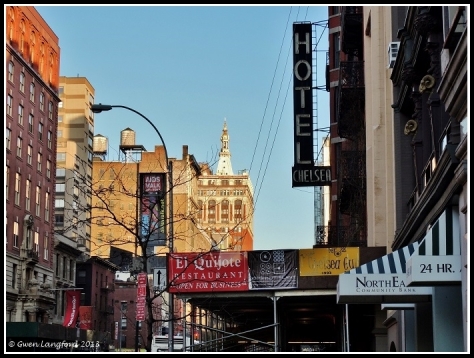 After this it was time to go join everyone else in the restaurant and it was great meeting up with friends I’d met before and also to meet new friends. We were joined on the night by the wonderful Sylvie Simmons who with Ali Hugh’s and Brett Avery treated us to their renditions of Leonard’s songs before, between courses and after our dinner. Sylvie has written my favourite to date biography of Leonard so it was a pleasure to meet and speak with her and I also enjoyed my conversations with Ali and Brett. Apologies for the quality of these photos. I didn’t want to use the flash and blind you all!! 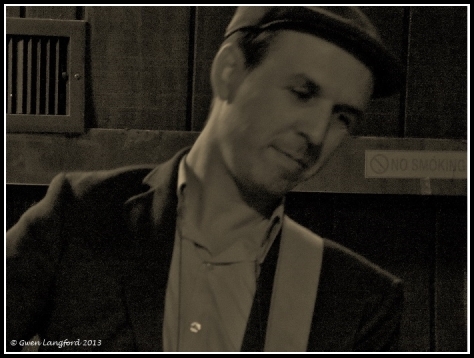 Also in attendance was Leonard’s sister Esther Cohen. It was a privilege to meet and speak to this wonderful lady who told me when I asked for permission to publish the photo of us on this site said she was honoured that we allowed her be part of our experience. I replied that we are the honoured ones. 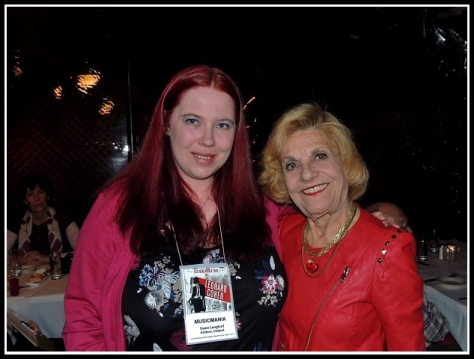 After the wonderful dinner and music and speaking with friends and our special guests there was one more treat in store where it had being arranged by Dick for us to get a look inside The Chelsea Hotel. The hotel is currently closed for renovations so to be able to have this glimpse inside was precious and is a wonderful memory to have.

I’d like to say thank you to Dick and Linda for organising this wonderful night, to Sylvie, Ali and Brett for the entertainment, to Mandy for taking the photos of me with Esther and of me inside The Chelsea Hotel and Esther for being so kind and gracious when I spoke with her.